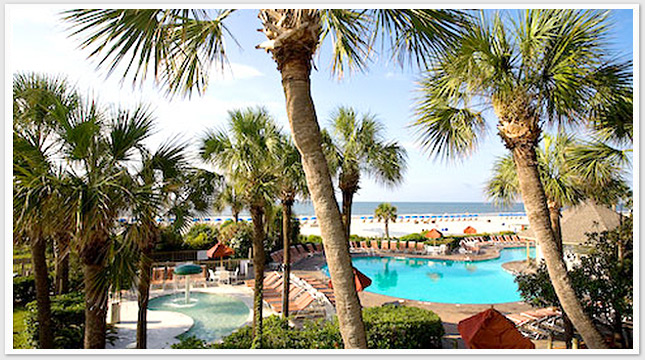 This resort hotel is located oceanfront on the south end of the island at Coligny Beach. Hotel features 202 contemporary-styled rooms only a short walk to the white sand beaches or to shopping, restaurants, golf courses and local area attractions. With more than 4,800 square feet of flexible meeting and banquet space, the hotel can accommodate groups up to 350 people. A professional sales and catering staff are at your service to assist in planning all your needs to ensure a successful gathering. From customized menus to specialized theme breaks, the staff will go the extra mile to make your event a success!

You gotta love Arthur Hills’ ability to make the best out of the land. This is a long, brawny course where you definitely use every shot and every club in your bag. One of his best on the island, and a good companion to his course at Palmetto Dunes Plantation.
Like the best of Hills’ work, the course is seamlessly integrated into the natural landscape. Along with the designer’s trademark undulating fairways, this heavily treed course features protected greens, many edged with bunkers, as well as strategically placed water hazards. Most memorable is the large lake bordering the difficult dogleg-left finishing hole.

What Make’s Us the Best Choice on Hilton Head Island, SC 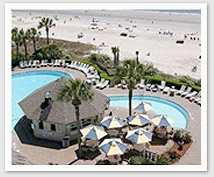 Welcome to The Beach House, a Holiday Inn Resort. Located directly on the shoreline of the island’s popular Coligny Beach, the final touches of a major revitalization were just completed to create The Beach House, a Holiday Inn Resort. Showcasing the best of Hilton Head’s stunning beauty and island appeal, The Beach House promises a genuine beachfront experience on a stretch of South Carolina’s most enviable shoreline. The Beach House embraces Hilton Head’s renowned island culture, incorporating it into every detail. The Beach House gives guests an ideal location for exploring Hilton Head or just kicking back for a relaxing beach escape. With more than 50 miles of scenic pedaling and nature trails at its doorstep, the resort’s newly designed interior emphasizes the island’s family-friendly biking culture & brings the island’s love for exploration indoors. The resort was recently revitalized, including an update of all 202 guestrooms, which now feature a stylish, cool blue décor, plush linens & updated amenities reflecting the natural colors and textures of the island landscape. The indoor space has been transformed and introduces Marker 59, an all-new sophisticated lounge and restaurant offering culinary favorites from the low-country and breathtaking views of the Atlantic Ocean. The resort’s fitness center has expanded & been refreshed with new equipment.

From the moment you arrive at the Holiday Inn Oceanfront, you’ll see why we are the preferred choice of Hilton Head Island hotels. Splash around in our free-form outdoor pool or work up a sweat in our 24-hour fitness center. Entertain the kids on the playground or at the kiddie pool and fountain. Ready to unwind? Park yourself at our famous Tiki Hut and enjoy a frozen cocktail with your toes in the sand. You’ll find unrivaled service and exceptional value with features that include: 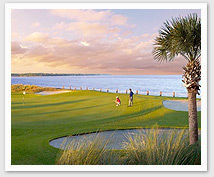 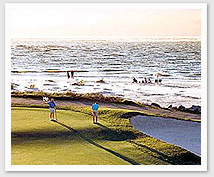 Nestled along the Atlantic coastline, Port Royal Golf Club, named one of the “Top 10 ‘Exotic’ Golf Courses in the World” by World Property Channel and one of the “Top 75 U.S. Golf Resorts” by Golf Digest Magazine, is located on the northwestern point of Hilton Head Island. The Club is situated in the Port Royal Plantation along with the luxurious oceanfront Westin Hilton Head Island Resort & Spa. In addition to being praised for its unrivaled golf experience, Port Royal Golf Club is also well-known as a world-class tennis destination.

The Barony Course was designed by George W. Cobb in the early 1960’s and was one of the first courses on the Island. From the tee box, many of the holes appear to be relatively open, but as you approach the newly resurfaced Bermuda greens, the real challenge becomes clear.  The greens are generous and protected by thick rough and unforgiving bunkers, entitling the golfer to have good touch with mid to short-range iron shots. This is a course where accuracy, not length, is paramount.

Planter’s Row was designed by Willard C. Byrd and built in 1984, becoming the Plantation’s newest course. It has played host to the Hilton Head Seniors International Golf Tournament, a former senior PGA Tournament Event. This course offers a different look from its sister courses, with water on 10 of the 18 holes. The narrow, tree-lined fairways lead up to the courses small undulating greens. Planter’s Row is a great challenge for golfers of all skill levels.

Robber’s Row was designed in 1967 by noted architects George W. Cobb and Willard C. Byrd, and was redesigned in 1994 by world famous architect Pete Dye. The course is located on the scenic marsh side of the Port Royal Plantation and cuts through beautiful strands of magnolia and live oaks. This course sets atop former Civil War grounds and features historical markers throughout the course, describing events which took place on the Island. Although tee-shots have generous fairways to land in, approach shots require accuracy to the well-protected greens. Robber’s Row is a course rich in history and challenge to any golfer.

Important: Be carefully with most other National Golf Schools they only do “Video By Request”. What that means is they don’t do video on a regular basic. Call for a detailed comparison – 800 756 5052.